When the time came to create a cake for my grandparents’ birthdays, I struggled to come up with an idea. What does one make for the perfect couple? The man who is so fiercely dedicated to protecting the marginalized of our society, giving a voice to those who have none? Who has shown his children and grandchildren the very definition of love with the way that he adores his wife? The woman who leads the conga line across the stage at the restaurant when our family’s “song” comes on, who demonstrates her pride in her family with unabashed delight? Who- literally- will seek out the people on the fringes, so that they experience, even if for a moment, the feeling of belonging and inclusion? The couple who cares for each other before they care for themselves, and who have demonstrated how to live out a faith-filled life that is brimming with love?

With these thoughts swirling through my head, I rejected idea after idea. Nothing seemed good enough for them. And suddenly, my sister said, “The family tree!” Now, everyone knows that I am spending much of my free time conducting family research, but I hadn’t thought of actually bringing that to life in edible form. After a discussion at dinner on Sunday, it was decided: I would attempt to recreate a family tree. Grandparents at the bottom, with the families sprouting off on the branches. What better to way to honor them than by bringing their “legacy” to life, in fondant form?

Though our history has been traced back until the 1700s in rural Ireland, out of necessity due to both time constraints and cake design requirements, I narrowed down the branches to include only my immediate family. This Irish blood is what accounts for the ghostly skin and the dark hair… And the fact that one in three people in the family are named Mary. (Ok, I’m just kidding about that.) But in all seriousness, due to Irish traditions, names tended to stay within the family. For example, in one strand of our tree: There is a Robert who has a sister Mary and a sister Margaret. Robert marries a Margaret (who has a sister Mary). Robert’s mother’s name is Mary, whose mother’s name is Margaret, who’s grandmother’s name is Mary. Add in an aunt Margaret, a great-aunt Margaret, two great-aunt Mary’s, a great-grandma Margaret, and a great-great-grandma Mary, and then remember: this is just ONE strand. On the other side- completely unrelated- the Margarets begin anew. 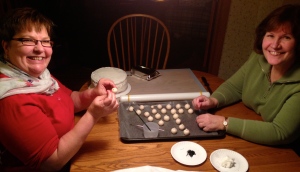 With the exception of one cousin, who has a name that says it all, really- Margaret Mary- the naming tradition has fallen by the wayside with the past few generations. (While it is nice to keep family traditions, it HAS been nice to get to know the other 19 letters in the alphabet!)

Ok, back to the cake! Counting up the relatives, we discovered we needed 25 heads. I asked/begged my mother and aunt to help in this endeavor, promising them that “fondant is really fun!” Luckily, these two women are great sports and we really did have fun making heads, noses, eyes and mouths. (And this aunt isn’t even a part of that particular tree! Do you see what I mean? I have the best relatives all around!)

Next, we created a base for the tree. This tree was going to be very heavy, so we decided to use rice krispie treats instead of cake! Cover the base in fondant, and trim off excess fondant:

Next, create the tree. I used a large plastic cylinder, stuffed it with modeling chocolate, and then stuck in some metal decorative pieces I found at a craft store. I then duct-taped these sticks together because I was afraid the addition of the heads would cause them to shift around a lot.

Once the branches were secure, I added the heads (in family groups). The heads had hardened with a small bit of wire inside, and I wrapped the other end around the “branch” and secured it with floral tape. Then the entire branch was covered with modeling chocolate. 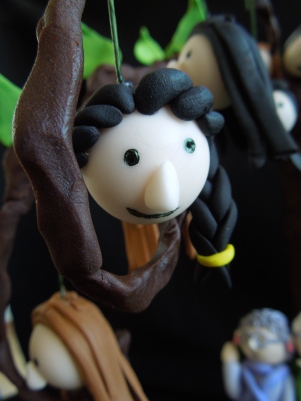 The entire project ended up taking a ridiculous amount of time – my lovely mother was roped into work with me literally all day. She was a hard worker that completed all the hard or boring jobs like making leaves (yawn), softening the modeling chocolate (ouch!), and everything else that I could bark out at her.

Normally, I spend a lot of time thinking about the cake recipient while I’m decorating, but boy, in this case- wow! It was like a trip down memory lane! 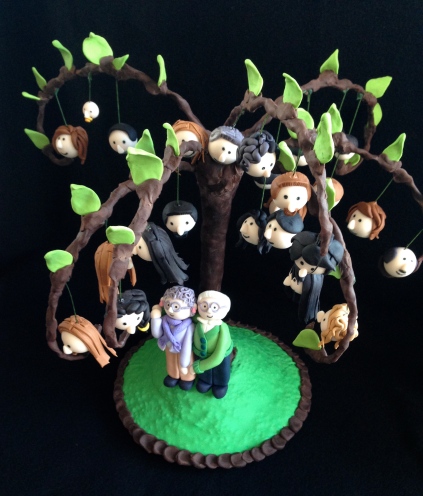 Later that evening, we had a birthday party and presented them with the cake. As always, it was a very enjoyable evening and I was reminded about how blessed I am to have this life, these perfect relatives. And as I was thinking about what to put in this blog post, an unfortunate quote came to mind: “Every family has a weird relative. If yours doesn’t… it’s you.”

6 thoughts on “(Literally) My Family Tree”