Ahh, the Super Bowl. My favorite game of the year! Because it’s the last football game that I have to hear about for a while! (Kidding! Kidding!)

It’s not that I completely despise football- it’s just that I don’t understand it, and from my uninformed opinion, it’s nothing that the introduction of a strictly enforced limit of whistle-blows wouldn’t fix in a hurry. In an attempt to understand and to participate in the hype, I recently attended my first game- Bears vs. Packers! It didn’t go well for the Bears (did that need to be explicitly stated?), but it was quite a learning experience, and, I have to admit, a lot of fun. 🙂 Going to a Bears game had been on my bucket list and so my kind aunt, mother, and sister accompanied me. I wrote about this experience in my “30 While 30” blog, and will paste a bit of it below:

Earlier that morning, my aunt had piled us into her car and then zoomed off to catch the bus that would take us directly to the stadium. As soon as we sped away, she began a rousing version of “Bear Down.” My mom quickly joined in: “Bear down, Chicago Bears. Dah dah dah dah, dah dah dah, dah VICTORY…” They proceeded with the song and missed the majority of the words, but certainly had an unmatched spirit… and volume. As soon as that was finished, they began an in-depth, complex explanation of the game of football. In the backseat, I listened for about two sentences, and then stared out the window. What an ugly, gray day, but at least it wasn’t precipitating. A few minutes later, I looked at Elizabeth, who was looking at her phone. Miraculously, the ladies in the front were still going! Elizabeth and I exchanged glances and rolled our eyes. I thought about stopping them, but then I got curious and wanted to see how long they would go, and I am happy to report that we made it a full twenty minutes without a pause.

I hadn’t paid full attention to their explanation because I actually understand the game already: you are trying to get your ball all the way to your set of yellow posts (but you have to be careful, because every once in a while, they switch which posts are yours). You can choose to kick it in, throw it in, or run it in. These are all worth various points. There are about three players on each side that are important (one guy throws, one guy runs, and one guy catches)- actually four if you count the kicker who, let’s be honest, spends most of his time watching the game. Now, while these important people are working together to score the points, the rest of the men generally try to knock each other over. Usually these men also have copious amounts of hair.

Football has the interesting ability to elongate time- the quarters are meant to be 15 minutes, but everyone knows that games actually last for 3 hours or more, which means that 1 minute (in the regular world) = 3 minutes (in the football world). They seem to accomplish this by calling hundreds of timeouts and also by breaking little rules, which causes the refs and/or coaches to cast colorful flags into the wind. The flags are different colors depending on the crime.

Each time your team has the ball, you have four chances (they call them “downs”) to get your ball to your endzone. Sometimes, when they can’t quite tell if the ball went far enough, they bring out two people holding orange sticks with a chain connecting them and they measure the distance the ball went. This will tell you if you’re qualified to take another turn. This is one of the major ways in which they manage to elongate time in Football Land. (It is unknown as to why, in an era in which they have remote-controlled cameras literally flying and capturing the game from above, they still choose to measure something as important and potentially game-changing as a “down” by using two men holding sticks.)

While all of this is happening on the field, many things go on on the sidelines, as well. They allow some players to exercise on stationary bikes, for example (probably the kicker, because he doesn’t do a whole lot and I’ll bet he gets bored). There are a lot of other things happening on the sidelines, too- usually lots of arguments, flying clipboards, and red-faced coaches who look like surely they will have coronary attacks within minutes.

Unfortunately, that game failed to convert me into a sports fan. So when I realized recently that I haven’t posted anything from this blog in over a month (and that is bad practice for building readership! 🙂 ), I decided I needed to change that! So here I am, going with a Super Bowl theme! Enjoy!

I went to Home Depot and asked if I could buy astro-turf in, say, a 4 by 2 feet section. The man laughed and told me it was sold on a 12-foot roll. So- does anyone need any astro-turf? I have a lot of extra!

I also bought some styrofoam and taped the pieces together. I cut the astro-turf to fit, and glued them on the sides. Then I used white tape to make the lines on the field. Ta-da!

Creating the Cookies
For an in-depth explanation of how to create jersey ones, check out the hockey jerseys I made here at this link. 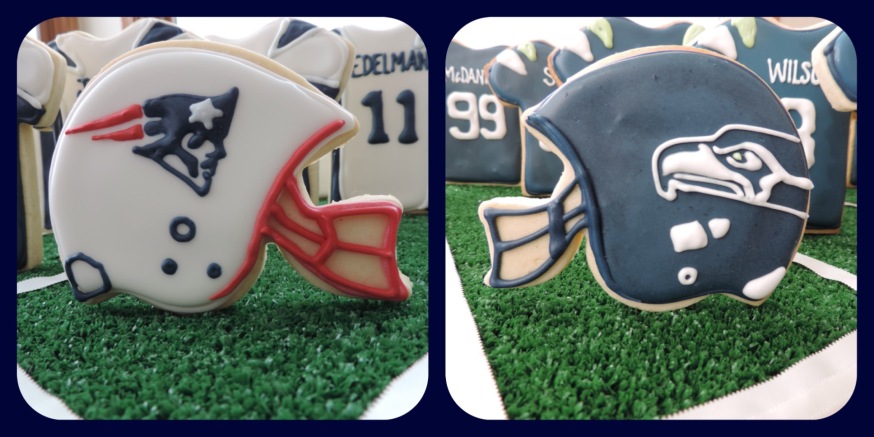 The last step was to attach sticks to the back of each cookie, and then insert the sticks into the styrofoam. This is very simple, though I forgot to take a photo. Put several candy melts in a piping bag, microwave it on half-power, and then cut off the tip. Pipe a line on the back of the cookie and set the the stick in the melted candy! It’ll be hard within five minutes and ready to use.

One cookie that didn’t make it onto the display: My Elvis Patriot. C’mon, you can’t deny it- he looks exactly like The King! 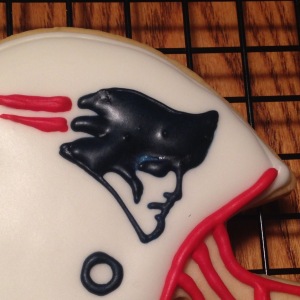 Complete with a deflated football. Sorry, I couldn’t resist. 🙂

5 thoughts on “Game On! Super Bowl Cookies Fit for Champions”