What do aliens serve their tea on?

I recently had the honor of making this cake for my mother’s quilt guild for their UFO-themed retreat. (To a quilter, a “UFO” is an “UnFinished Object,” and so they all brought their UFOs to the retreat and finished them up.) I really enjoyed working on this cake, and I’m guessing it’s because I had lots of help! 🙂

THE INNER STRUCTURE:
The entire structure of this UFO was engineered by my brother-in-law. He’s a realtor by day (need a new home? Check him out here: http://www.ikahngroup.com/) but he’s a creative engineer by night. (Side note: I wouldn’t recommend going to their house at Halloween. Lights/sounds/structures/props/music/moving creatures/and more will scare just about everyone.) The structure he created allowed for battery-operated lights as well as dry ice for fog. A long metal tube had a few vents cut out at the top. Water was to be poured inside the tube, the dry ice added, and the cake set on top. The dry ice would billow around the base of the spaceship, making it look more realistic. Meanwhile, on the ship, the lights were put through drilled holes and stuck in the styrofoam to resemble a “typical” UFO shape. There also was an access point for the lights battery pack. (I tell you, the guy thinks of everything!)

As I mentioned, I didn’t do a whole lot for this cake. It was dropped off and I just got to do the fun part. 🙂 So, thank you again, Dan, for being the brains and brawn behind the operation! And thanks to my dad, who researched, drove out to buy, and later chopped up the dry ice. And my mom, who patiently helped me take about a zillion photos with different lighting/smoke patterns/backgrounds. As usual, I could not do this by myself!

(There should be a Vine (video) below. Mobile users/ email subscribers, it may not show up. There are flashing lights, so if you’re seeing the short Vine video below and it’s bothering you, simply click on the video, and it will stop.)

COVERING THE BASE:
Here are some in-process photos of the UFO base: 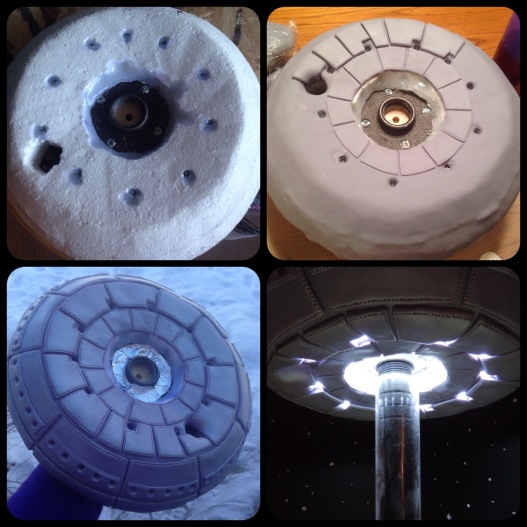 Want to know something sad? There is a tool that is like a pencil and has a roller on the end. You roll it along your fondant and it’ll punch in a perfectly straight line of little holes. I own this tool, but did not have it with me while I was decorating. So if you’re wondering how long it takes to punch those holes in, one by one, for each metal panel on the top and bottom of the UFO, the answer is: approximately nine thousand hours. And made infinitely worse knowing you already possessed the tool.

I sprayed the fondant-covered base with silver Wilton color spray. A bit of a mess (so it was done outside)- but look at the difference between the unsprayed/ sprayed versions!

CREATING THE DESERT:
This desert easily could have been made out of cake. Since I didn’t need that many servings, I used paper so that I could do it in advance. Also, it was lighter than cake. And less time-consuming. And cheaper. Steps here: crumple up newspaper, randomly tape chunks of it to the board, and cover with fondant. Then, paint fondant a bit at a time with piping gel, and put on cornmeal. (That was what we happened to have in the cupboards. I’m not in love with the color, but it looks alright.)

MAKING THE ACTUAL CAKE PART:
This part was the easiest! I call it: “The UFO That Looks Like a Hat.”

I used a small pop-top light to put on the top of the cake. 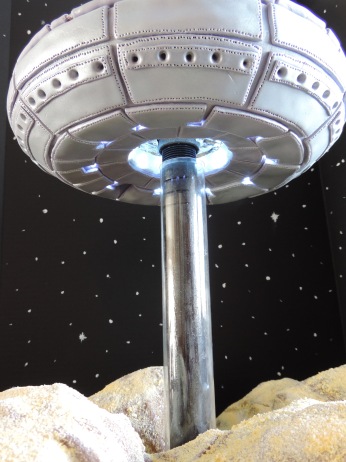 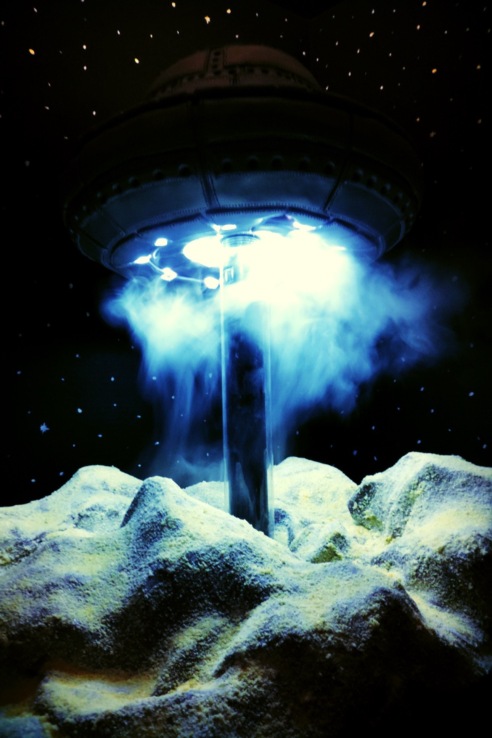 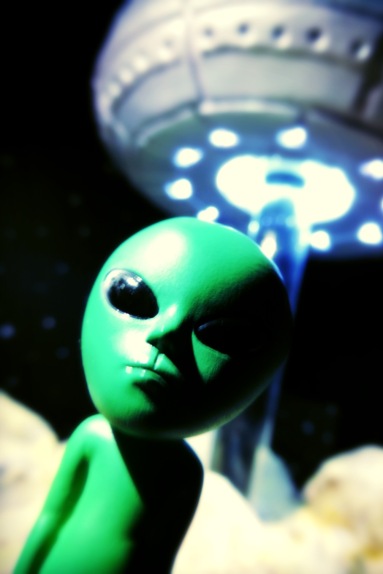 Bonus: these little guys were actually purchased in Roswell. I feel like they gave some authenticity to the whole endeavor. 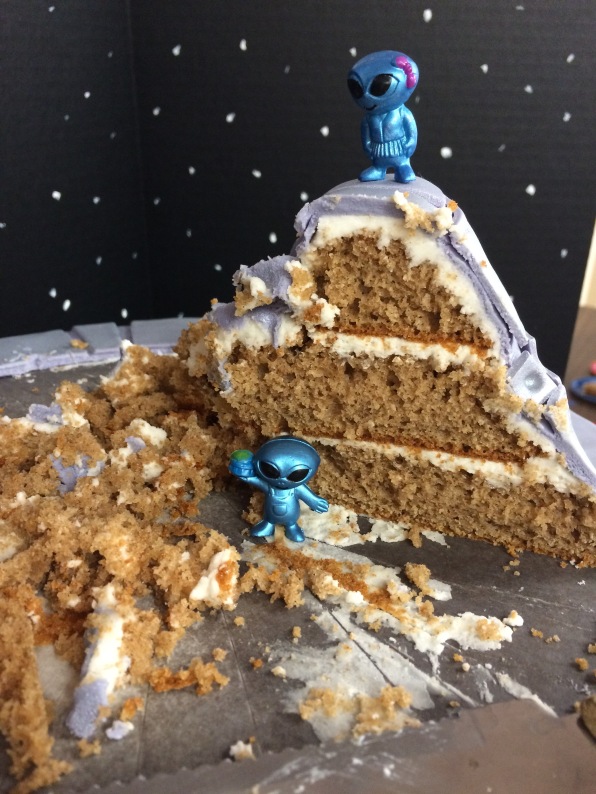 4 thoughts on “A UFO Cake That’s Out of This World!”